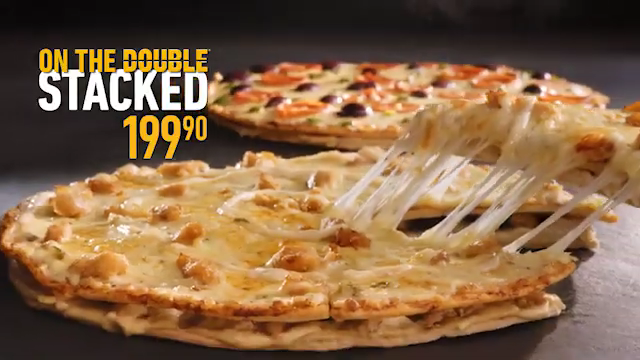 Debonair Pizza continues to innovate with On the Double Stacked

Debonairs Pizza, the leading quick service restaurant in the pizza category, has launched an innovative new version of its popular On the Double offer as part of its ongoing strategy to engage with millennials and attract new customers.

The 28-year-old brand briefed its long-standing agency, FCB Joburg, to develop an above-the-line campaign for the new On the Double Stacked to flight on SABC channels, ETV, DSTV channels, M-Net and Comedy Central.  Conceived by Creative Director Greg Cameron, Art Director Julie Thorogood and Copywriter Este De Beer, ‘It’s a mouthful’ is a characterful party life vignette showing how the On the Double Stacked, with an extra layer and a cream cheese filling, can stop even the most talkative person from nattering on, and on.

It was directed by Egg Films’ Zweli Radebe and took two days to shoot: one day for the performance actors and one day for the food, and is flighted in both 30-second and 20-second formats. You can view the rib-tickling ad at: https://youtu.be/itazy2Wv2Kw Debonairs Pizza Marketing Executive, Toni Joubert, explained that innovation remains a key trend in the QSR category.

‘Today’s consumers, especially millennials, are excited by the opportunity to try something new,’ she said. ‘As a result, they expect to see menus change regularly to feature new products alongside the old faithful. ‘For this promotion, we’ve given the On the Double® a bit of a twist by sandwiching our secret cream cheese filling between two crisp bases and topped with their favourite On the Double flavours. The On the Double Stacked offers an exciting, filling sensory experience for all.’